« The child has a form of mind able to absorb knowledge. » Maria Montessori

The blast of language

Language learning is a sensitive period of time experienced by children between 0 and 3. It is what we call the blast of language. The child learns many words and gradually begins to make constructed sentences. From the age of 3, the chiild increases his vocabulary, expresses abstract concepts, copy turns of phrase he/she hears around him/her. It is also at this age that the child forms his own ear for sounds specific to each language, and is able to repeat them, free from faults.

It is for these reasons that learning a second language is easy and natural for young children. However, one should be very careful about the way the second language is taught as the child will learn the language errors just as easily. He can also grasp the two languages as a single communication mode, which can lead to confusion. In order for the child to acquire a second language in the best conditions, teachers of Secrets d’Enfance, teach only in their mother tongue. Thus the communication between children and teachers is natural, and the accent is flawless. 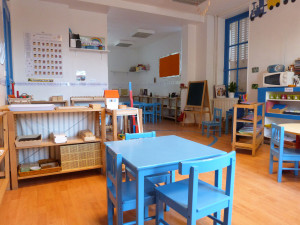 Children have therefore the equivalent of two days in French and two days in English. The school provides several solutions to families:

Learning a second language provides children an opening to the world and to other cultures which constitute an essential asset for his future.

We found in Secrets d’Enfance, a second family for our children. An attentive and caring and open-minded team.
Our daughter attended her 3 nursery school years there and holds unforgettable memories of it. Our little boy, has been learning there for two years and we are impressed by his leadership and his ability to do things alone. He is very happy. A big thank you to the whole team.